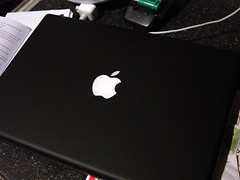 Looks like Mactivate got it wrong, it wasn’t the heatsink, as referred to by my earlier post. Looks like I have seen good advice from the Web, never buy a first generation Apple product, until they work out the kinks! I guess Mactivate have been snowed under with heatsink problems, that they never bothered to check other parts of my Macbook, since it is such a common problem.They have ordered me a new “logic board” (I am guessing the PMU like I thought it was ;-) ). In other news Apple released a firmware update for those poor unfortunates that have been suffering Random Shutdown Syndrome (or RSS) for short :-D ). Hopefully I should have it back by this Tuesday (November 7th) plus a new heatsink and logic board…. fingers crossed anyway!