I recently purchased - known as a cult motorbike - a Honda BROS (known in the US as a HawkGT). It is a 400cc V-Twin 1991 model, with 33BHP / 24.6Kw out of the factory. That put’s it under the legal limit for a learner motorcycle in the A category of license in Ireland. I’ve been progressing through bikes, slowly gaining confidence and experience. I posted about my Yamaha YQ50, My Yamaha YP125 (Majesty) and now it’s a Honda BROS' turn! 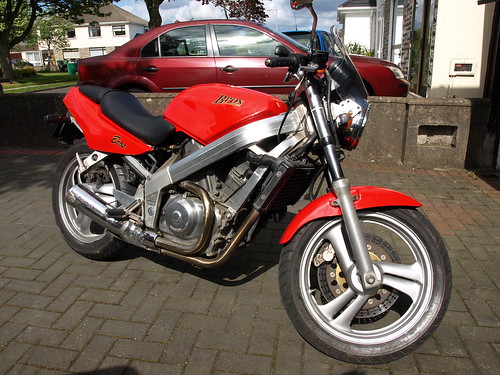 I just also ordered a Haynes Manual for the motorcycle and joined HawkGT forums, so I am going to learn a thing or two about maintenance and upkeep of it. Already looking at parts on eBay, the choice is huge, and pretty reasonable in price. Things most people replace easily are the handlebars, foot pegs, indicators and so on.

Experiences on it It’s a comfortable motorcycle to sit on, but for someone used to a scooter design, where every limb is free bar right hand, it is tricky to start off with. Clutch control and gearing was totally new to me - so it took a bit of getting used too. Slowing down, starting up and switching gears smoothly are rough starting out, but in a few hours I’ve got basics down. It’s all road experience now - road holding, good control of the motorcycle, looking out for danger and indicating properly and well in advance.I’m not a fan of the Road Safety Authority in Ireland (a lot of their wacky suggestions if made law would put under 25’s off the road) but their goal of reducing road deaths is one being a motorcyclist I definitely support - they make a great leaflet on motorcycle safety (PDF), worth a read.

Handling Handling seems like it should be quite bad, I mean with the Majesty I wasn’t used to seeing so much of the road!! But it is in fact measurably better than the scooter. I think it’s because it’s heavier and has better tyres for the frame than a scooter could ever have. The Majesty, typical of most scooters, has the engine on the back wheel, whereas the Bros, as can be seen in the pictures, has a lot of weight in the centre, towards the front. One video review on Youtube says' BROS' love backroads, it does in fact seem to love nice swishy corners. 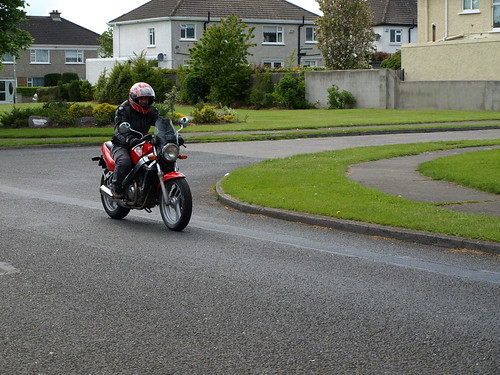 Looks
Being a naked bike, I felt naked on it a first, like there was very little protection from a fall. This can be good and bad. Good in that it reminds you that your close to the road, so don’t do anything stupid. Bad in that there is no protection from Wind, an element I consider worse than rain for safety, only beaten by ice. Does it make you a better driver? Probably so, you are not as insulated as you (thought) were on the Scooter.

Purchase decision For me when purchasing it came down to a Honda Bros or a Honda CB250, I choose the Bros primarily because it look’s so much better on the eye. It has a bigger engine (thinking to keep long term after the test), has plenty of after-market parts (the CB250 can claim this also) and the engine has an impeccable reliability - one Bros I saw had 250,000 miles, yes that’s quarter of a million miles on a motorbike engine, and it was still going!