It’s been over a week since I received my Garmin Zumo 660 Motorcycle GPS unit. I thought I’d give it a run-down for potential buyers on my experience for the first week. Firstly I should mention, I’ve never owned another Garmin unit, and had two mobile GPS' units before (one being Nokia N800 with Bluetooth external GPS and other Apple iPhone 3G). The reason I bring this up is that a lot of the reviews I’ve seen written compare it to it’s predecessor, Zumo 550, which obviously I can’t do. 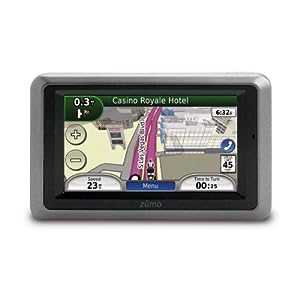 What good is a GPS without good map quality? Garmin’s maps are by Navteq, and generally are of a good standard here in Ireland. The only roads it has presented trouble with are roads that have opened in the last 6 months, which I guess were too soon to be compiled in to the quarterly updates they provide (of which one should be free when you register). Lane assist comes with the unit, and although only works for me with high profile and busy junctions, it is well worth the inclusion.

##Custom Maps Garmin allow a cool feature called custom maps, which means you can overlay images, giving the edge GPS co-ordinates, so that your map can replace a section of theirs. A good example would be replacing Dublin Zoo map with all the attractions (Lions, Tigers etc) visible on your GPS. Similar to this is a not oft published feature allowing you to have supplemental maps, be they Garmin official (I have Australia and New Zealand) or from other sources, such as OpenStreetMap (OSM). OpenStreetMap is always more up-to-date than any maps Garmin will release, but accuracy is always a problem given the wiki nature. Nevertheless OSM can include contours in a topographical style, which are the most expensive maps to purchase.

POI
POI stands for Points Of Interest. They are the Hospitals, Restaurants and Fuel stations listed on your unit. While Garmin’s included list is good and somewhat comprehensive, OpenStreetMap ones were good to have. Most of the OSM ones end up in the wrong format and look slightly odd, but are fairly accurate. You can only have one set of custom Points of Interest, so it’s worth bearing that in mind if you need more (combine them).

Setting up the unit

Set-up is extremely straight forward and doesn’t require more skill than hanging a picture really. You get a RAM mount, which you can choose to either use the U bracket or the clutch handle mount, fitting almost all motorcycles. I had to use the clutch mount on my motorcycle, I simply didn’t have the bar space to mount the unit anywhere else. The RAM Mount plate screws into the Garmin mount, and the ram mount is held on to the base by a dual ball and socket joint, allowing maneuverability on the GPS. There’s a thumb screw on the ball joint to stop it moving when a comfortable position is found.

I then wired the units four molded wires (all in one wire until the end run) under my tank, with the
positive and negative to their respective terminals on the battery. I didn’t want to fiddle around with my ignition, so I just wired it direct (Garmin says it draws less than 1/2 milliamp with no unit in place), which after a week doesn’t seem to have affected my battery. Their is a fuse on the positive side, so that is a welcome addition. The other two wires are 3.5mm female jacks for connection to a pre-existing motorcycle entertainment unit, or for using directly. I;ve used the 3.5mm jack directly for headphones, and found they worked well (although bog standard headphones in helmets can be sore and you have to make sure to ‘detach’ yourself getting off). For those reasons I’ve been looking at purchasing a Scala G4 Powerset Bluetooth headset (which incidentally comes in a bundle with the TomTom Competitor: The Rider).

I paired my current phone, Apple iPhone 3G without any issues. It will load your phonebook on to the device, but does not do this immediately (let it stay actively paired for a while), although immediately after pairing you can dial any number you like. I’ve only dialed using the inbuilt mic and speaker on the unit while stationary and the quality seemed acceptable, but would definitely be more useful if a headset was used. No SMS functionality is available which is an Apple limitation, disappointing in my opinion (would like to see SMS' pop up onscreen!). You can see compatible phones on Gamin’s Bluetooth phone list.

I’ve only used BaseCamp and it’s poorer cousin RoadTrip on Apple Mac OS X, which is the main mapping and routing software (on Windows it’s called MapSource). I’ll start off with the biggest limitation: crappy maps on your computer. The software (probably due to licensing) only comes with a very poor ‘basemap’ which is a bog-standard zoomed out view on the map. If you like me wanted to look at your favorite locations, your out of look as they’ll appear on a blue sea-like background. I ‘fixed’ this by using an OpenStreetMap (which incidentally is a good way to test accuracy for your locale).

Also for Windows and Mac is POI Loader, which helps you load any custom Points of Interest you may have.m As I mentioned earlier, only one “extra” (in addition to Garmin included ones) set can be loaded on, so if you want say custom speed cameras and Open Street Map POI or Geocaching locations, you’ll have to combine them using other tools first.

Geocaching is GPS treasure hunting, for want of a better explanation, or see Groundspeak’s informative video. GPS units with a good accuracy level are needed, as well as good maps. Some of the most popular units used are topographical ones, but you can use a road GPS like the Zumo 660. Geocaching used to require printing out co-ordinates and clues, and then inputting that manually. I found an excellent website/guide to do Paperless Geocaching. You need to subscribe to Geocaching.com to get the relevant points around you, but you get a lot of information in to the Zumo - like size of the cache, logs of people who last found it, the hint, the location blurb and so on.

If you never done Geocahcing.com you can join and print caches for free, then input co-ordinates in to the Zumo (Where to? Menu > Co-Ordinates) to see if you like it. The only major difficulty is the last few meters, as you’ll want to go to in to pedestrian mode, and then use the compass to get the exact spot (which you have to look at co-ordinates for). At this point I grow impatient and just use my iPhone to get me the last few meters, but it’s only happened once. It definitely saves my iPhone battery since the Zumo is run off the vehicle, so no worries there. Also cool is the way you can set a distance before loading the points, so if you drive past a Geocache location you can be alerted. You can set alert distance lower or higher depending on your will (it could get annoying in a big city with a large radius!!).

I found it easy to add my custom locations, such as family, friends etc. It can be done through the unit or done through the software on a computer. The computer version for some unknown reason won’t use addressing information on the unit, so finding the address you need, if present, is best done on the unit. Other than that for rural Irish locations, I used Google Maps in Satellite/Map view and used the latitude and longitude lab extensions to right click on a place and get co-ordinates. I then copy and pasted these in to the Garmin software as a custom waypoint (warning: they both use different format for co-ordinates, so be careful and double check location after). 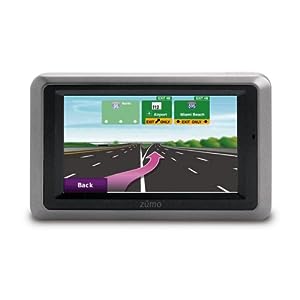 Logs are a cool way to check your mileage, average speed, etc. Logs are automatically kept each time you select a location to travel to. For those of you out there like me, who like graphs, even probably meaningless ones, there a good (and free) service from Garmin called: Garmin Connect. You can see all your route information on a shareable Google Map, and export it to Google Earth. Links to this information can be shared on Twitter, Facebook etc. I made a trip out to a friend of mine and within minutes of arriving home I sent him the details of my route out to him (which was useful as I found it hard to explain all the turns I took getting there).

##Overall conclusion A well made unit, with regular firmware updates, it’s hard not to recommend the Garmin Zumo 660 if you can afford the steep price a fully waterproof, ruggedized car and motorcycle unit comes in at (about € 550/$750). I got mine because I plan to use it for both uses, as well as Geocaching, monitoring mileage and routes to save fuel, etc. The mount for me is solid when the unit is held (and my unit is exposed, not behind my screen, so it gets the wind) but it’s hard to know sometimes whether the unit “clicked” properly in to the mount. That’s obviously a concern since you don’t want to drop the unit at speed. It has also frozen and shutdown twice, but that’s been resolved by a firmware update and hasn’t happened since.

I like Garmin’s interface better than almost any other GPS maker (bar Google Maps navigation, which is not as comprehensive yet, and only on phones), so ease of use is good in my opinion (esp. with gloves). A telling endorsement is the fact BMW and Harley-Davidson embed these units with new motorcycles.

Overall a solid unit for the small market of Motorcycle ready GPS units, a must buy for bikers who intend to travel and can justify the cost.