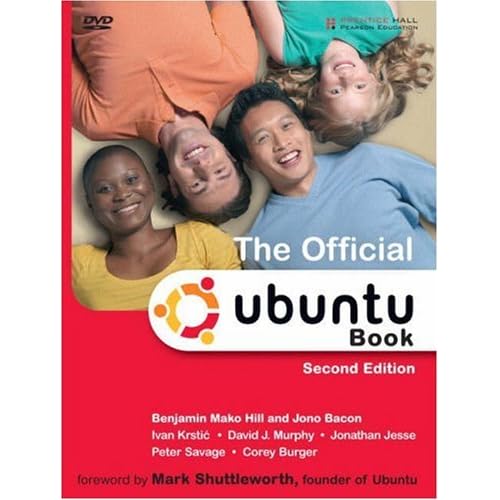 The Ubuntu Book (2nd Edition) is a nicely put together book for dealing with the Linux operating system in a number of clearly laid out and well presented chapters. Chapters are as follows:

This book is a very complete introduction and contains suprising elements related to finding out and joining the community of users - which you will not find in other Ubuntu Books (such as O’Reilly’s Ubuntu Hacks) which make it a unique and worthwhile addition to any Ubuntu users personal library. It is most helpful to new users to Ubuntu, which sections on installing and help with problems that could be faced. Having said that, it falls short on the amount of truly unique information that it contains - most of the books contents can be found on the web. What you are paying for is a well-laid out, well written account of the Ubuntu-sphere and all that goes along with it.

The price of €37.50 which I paid (less in the US, about $34.99 RRP) might be a bit much for some, but when you consider the operating system itself is free, you can easily justify the cost. A DVD comes included with the book which contains Ubuntu, Kubuntu and Edubuntu, rather handy if you do not want to download the cd image.

The Server section is obviously a bit more for the advanced user, but still is a quint introduction to the basics which is 34 pages long - probably not enough to warrant a purchase by a sever administrator or other power server user. The Edubuntu section offers an introduction to the school-based flavour of Ubuntu which tips on how they differ and administration of multiple machines (including a nice introduction to thin clients and servers for schools).

Whos the book for?
People new to Ubuntu, people moving from Windows, School Administrators all fit the test case. If your an Ubuntu power user, don’t mind taking down your system or messing with the kernel than you should stick to online help. However I bought the book to show to others and promote Ubuntu as a viable and successful alternative to Mac OS X and Windows - it gives a great impression of the project and it’s success to date and I also bought it to support Ubuntu financially.