Nokia have announced an upgrade to the N800 Internet tablet, called the N810. I suspect its called that because it is more of an incremental upgrade than a total visual refresh it was going from an Nokia 770 to N800. Here it is: 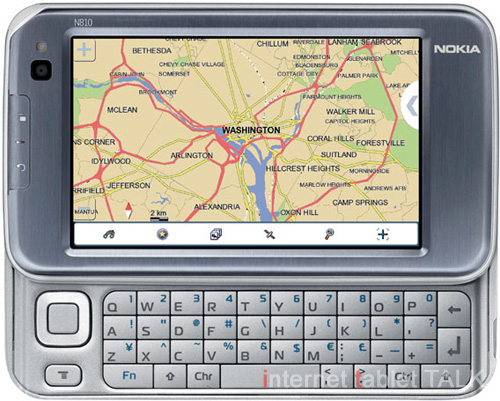 It sports a nice new hardware keyboard; inbuilt GPS (For satellite mapping) and OS 2008 (an upgrade to the operating system it runs). The N800 will also benefit from OS 2008, which will include GoogleTalk, Skype, Mozilla browser, among the usual such as its email client, media player, file manager, control panel, assorted games and an image/PDF viewer. The one feature it will emit is an inbuilt FM Radio, which was axed to make the N810 a smaller tablet. It still retains the best screen size for web browsing, bluetooth connectivity, and of course Wifi which is central to the tablets existance! No word on what easter eggs are included if any; on the N800 it was a radio and the N770 it was the microphone. Engadget has a great writeup on it, choc-a-bloc full of high resolution photos with size comparisons to Apples iPhone.